Kentucky vs. The Field has been a popular debate among college basketball for much of the season, but first, the Wildcats have to get out of the SEC Tournament. At 31-0, John Calipari’s team is the heavy favorite to win the auto bid and it will be interesting to see if Kentucky continues its trend of playing well in big games on national television.

As long as Kentucky stays healthy and fully engaged, there’s no reason they shouldn’t win in Nashville.

Arkansas is the only other top-25 team in the SEC and the Razorbacks are coming off of a late loss against LSU as they’ve faltered a bit down the stretch. But the Razorbacks feature the SEC’s Player of the Year in sophomore Bobby Portis and he’s been fantastic during SEC play.

From there, Georgia, LSU, Ole Miss and Texas A&M are still fighting for NCAA Tournament bids and/or better seeding. The Aggies and Tigers, in particular, could use a win or two to help get them into the field of 68 while Georgia and Ole Miss could use some wins to get out of the near double-digit seeding range they currently sit.

Some other dangerous teams lurk in the lower seeds as Vanderbilt is playing much better late in the season after some close losses and Florida has enough talent to at least put a scare into Kentucky if they play in the quarterfinals and the Wildcats have an off-night. 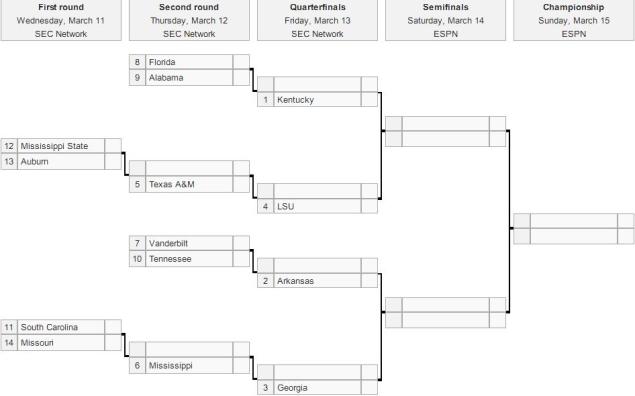 Like there was any doubt? The Wildcats have rolled to a perfect 31-0 record before heading to Nashville to begin the postseason and it seems as though Kentucky plays even better when the game has national significance. Defensively, Kentucky can be as dominant as any team in the country, and offensively, they have so many different weapons and ways to get shots that they’re tough to stop.

And if they lose?: Arkansas

The Razorbacks benefited from only facing Kentucky once in the SEC and they’re the only team in the conference to be consistently featured in the top 25 during league play. Led by third-team All-American Bobby Portis, the Razorbacks have been more consistent away from home this season and can intimidate teams with their athleticism on both ends of the floor. But can Mike Anderson’s team bounce back from a 3-2 end of the conference season that also included some narrow wins?

The Commodores are surging down the stretch and the experienced pieces are finally gelling with the freshmen. Sophomore big man Damian Jones has generated some early NBA buzz while freshman guard Riley LaChance is one of the most underrated freshman among power conferences in the country. As a team, Vanderbilt shoots 39 percent from 3-point range, and if they get hot, they can be tough to stop.

A third-team NBCSports.com All-American, Portis was the most important individual player on any team in the SEC this season. Averaging 17.8 points and 8.7 rebounds per game on good shooting splits (56% FG, 42% 3Pt, 74% FT), the 6-foot-11 sophomore scored in double figures in all but one game this season as the Razorbacks’ go-to guy. In SEC play Portis played even better, as he averaged 18.6 points and 9.3 rebounds per game while also blocking 2.8 shots a game in league play.

Kentucky has answered every question about its use of one-and-done players and the platoon system this season by dominating opponents and playing mostly selfless basketball. Calipari is a huge reason why. The head coach has gotten nine McDonald’s All-Americans to put aside ego for the greater good of the bigger picture (a national title) and the result has been one of the best college basketball teams in recent memory.