The Big Sky race was an entertaining one down the stretch as it tends to be, with three teams fighting for the title and others working to make sure that they weren’t left without a seat when the music stopped (four teams don’t qualify). Montana and Eastern Washington shared the crown, with the Grizzlies getting the top seed and the right to host the event. In addition to those two Sacramento State will be heard from, and Northern Arizona has the pieces needed to make a run as well. This should make for an entertaining weekend in Missoula. 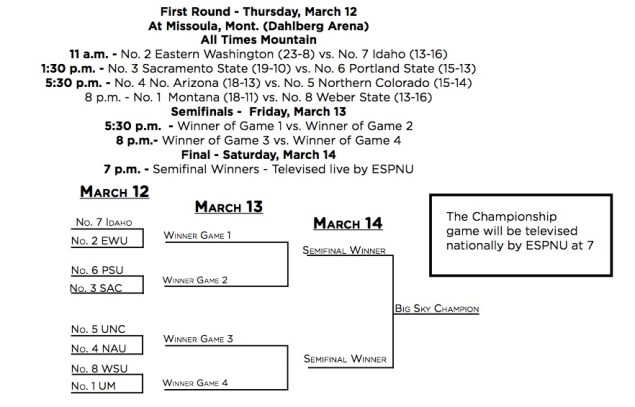 The Griz have talented players, led by guard Jordan Gregory and forward Martin Bruenig, but this pick is more about defense and home-court advantage. Montana was the best defensive team in the Big Sky in conference games, as they led the way in scoring, field goal percentage and three-point percentage defense. They were also tops in defensive efficiency (per kenpom.com) by a considerable margin. Playing at home will help, but the biggest reason why Montana should be seen as the favorites is the fact that they can defend.

And if they lose?: Eastern Washington

Jim Hayford’s Eagles averaged just over 80 points per game in conference games, and per kenpom.com they were the most efficient offensive team in the Big Sky. Tyler Harvey can light it up from the perimeter, as he’s averaging 22.9 points per game and both Venky Jois (17.1 ppg, 7.6 rpg) and Ognjen Miljkovic (10.2 ppg) also average double figures. In total six players average at least 8.1 points per game for a team that won at Montana in early February.

Averaging 19.0 points, 5.0 assists and 2.6 steals per game, McKinney is ranked either first or second in the Big Sky in each of those statistical categories. He’s also shooting 51.5 percent from the field and 42.3 percent from beyond the arc for the 19-10 Hornets.

Katz’s Hornets were expected to be a quality team, as the coaches picked them to finish fourth back in October. But the Hornets exhibited more staying power in the Big Sky race than some may have anticipated, and this is just the fourth winning season in the last 38 years of the program. The 19 wins Sacramento State has right now are the third most in school history for a single season.