The American is as down this season as the league is ever going to be. UConn and Memphis are both NIT-bound, barring a miracle run through the conference tournament. Temple is good, but they’d be headed to the NIT if they didn’t happen to catch fire against Kansas on a night the Jayhawks were struggling. Cincinnati overachieved this year, especially considering what happened with Mick Cronin.

That said, those struggles should mean that the conference tournament is going to have some weird things happen. 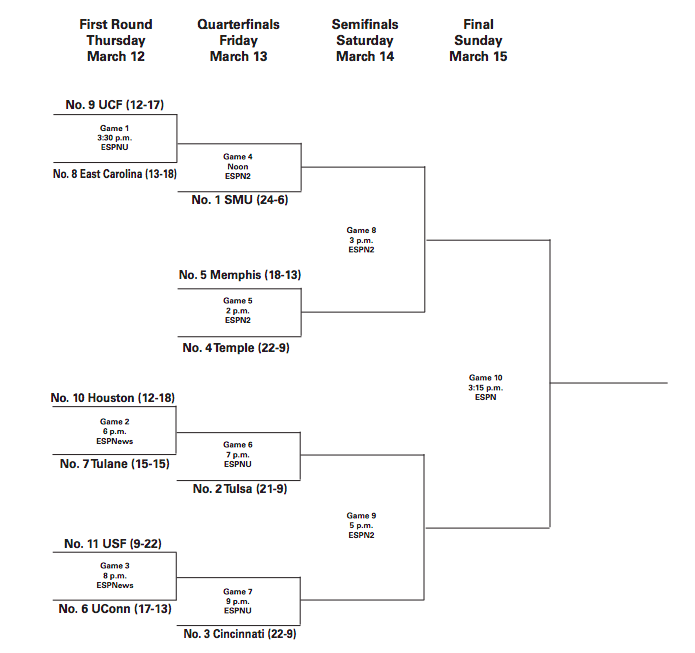 The Mustangs are, quite simply, the best team in the conference, and I’m not convinced that it is all that close. They have the league’s best point guard in Nic Moore and a front line anchored by the likes of Markus Kennedy, Yannick Moreira and Ben Moore. They’re tough, they defend and they execute offensively. There’s a reason Larry Brown is a legend.

And if they lose?: Temple

Let’s go beyond the fact that the Huskies have built a name for themselves as a tournament team the last few years, or that Ryan Boatright is the most talented player in the conference and surrounded by two potential stars — Daniel Hamilton and Rodney Purvis — who are coming into their own. This event will take place in Hartford and will be packed with UConn fans. They’re home games. Can the Huskies capitalize?

Moore wasn’t even supposed to be the starting point guard for the Mustangs this season. He was recruited over, relegated to playing off the ball with the addition of Emmanuel Mudiay. But with Mudiay heading to China, and the academic issues that forced Markus Kennedy, Keith Frazier and Justin Martin to miss time, Moore was this team’s rock, the reason they won the conference title.

Who had the Golden Hurricane playing for the outright American title on the final day of the regular season? Anyone? Bueller? Haith gets his fair share of criticism as a coach — some fair, some not — but there’s no denying the job that he did with this team in their first season in the conference.

Defining moment of the season: Emmanuel Mudiay’s trip to China

With Emmanuel Mudiay, SMU had a chance to be a legitimate Final Four contender. With their front line and a back court featuring Nic Moore and Mudiay, Larry Brown would have been in his element. As it turned out, Moore won Player of the Year and SMU won the league, but they’re ceiling as a team was greatly reduced.

CBT Prediction: UConn makes an improbably run through the tournament and wins the automatic bid by beating SMU.