For the second consecutive season the Arizona Wildcats convincingly won the Pac-12 regular season title, beating Oregon and Utah by three games. Sean Miller’s team is poised to play well into March and maybe even the first weekend of April, as they have all the qualities that a championship-caliber team possesses. The biggest boosts of the last month have been the improved play of center Kaleb Tarczewski and the bench scoring of Gabe York.

With leading contributors such as point guard T.J. McConnell and wings Rondae Hollis-Jefferson and Stanley Johnson, Arizona has the tools needed to win their first Pac-12 tournament title since 2002. The Wildcats will be the clear favorite in Las Vegas, but there are multiple teams that harbor thoughts of winning the title themselves. Utah has one of the nation’s best players in Delon Wright, and Oregon’s headliner is senior guard Joseph Young. Like Arizona, the Utes and Ducks will hear their names called Selection Sunday.

That brings us to the team that’s under the greatest pressure when it comes to the NCAA tournament: UCLA. While the Bruins are the four-seed there’s still work to be done when it comes to their at-large resume, and that’s what makes this week so important for them. Stanford, at one point considered to be a safe bet to return to the NCAA tournament, is now in a spot where they likely need the automatic bid to do so.

While every team has hopes of cutting down the nets Saturday night, there’s a clear favorite to accomplish that. But with Arizona not having the best fortune in this event, it wouldn’t be wise to rule out the field. 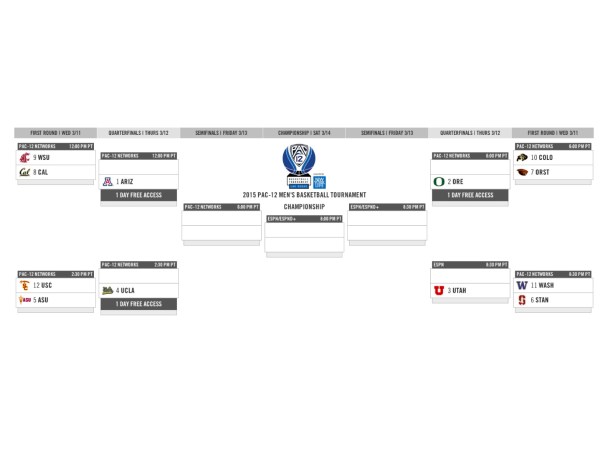 The last time Arizona won this event was in 2002, one year after their most recent Final Four appearance. If any motivation was needed for the Pac-12 tournament the conference’s coaches likely supplied that in their choices for the league’s top individual honors. Point guard T.J. McConnell, the heart and soul of this team, missed out on Pac-12 Player of the Year (Young won that) and Rondae Hollis-Jefferson wasn’t named Defensive Player of the Year (Oregon State’s Gary Payton II won). Those two along with Stanley Johnson, Brandon Ashley and Kaleb Tarczewski make up one of the most talented starting units in the country and they’ve received solid contributions from the bench as well.

And if they lose?: Utah

Of Utah’s 13 conference wins just one was by fewer than ten points (at Washington State), but they didn’t finish the regular season playing their best basketball. Larry Krystkowiak’s Runnin’ Utes dropped three of their last five games, and they need junior guard Brandon Taylor to get back on track offensively. This is a group with depth and versatility, and with freshman Jakob Poeltl in the middle there’s skill in the post as well.

Given the number of new pieces it took some time for Herb Sendek’s team to mesh, but they arrive in Las Vegas having won five of their last seven. Tra Holder’s been good at the point as a freshman, and Gerry Blakes, Shaquielle McKissic and Savon Goodman are the leading scorers. They don’t match up particularly well with Utah, which won both meetings comfortably, but they lost two games to Oregon by a total of four points and have wins over Both Arizona and UCLA.

Having lost three in a row and five of their last seven, the Cardinal stagger into Las Vegas. But they have experience in seniors Chasson Randle, Anthony Brown and Stefan Nastic, and Marcus Allen has earned more minutes as the season’s progressed. If Stanford is to have any hope of making a run they need Randle to shoot at a higher clip than the 39.3 percent he’s making for the entire season.

Wright’s one of the most versatile players in the country, as he’s averaging 14.7 points, 4.7 rebounds, 5.3 assists and 2.1 steals per game game. And despite dealing with defenses that tend to dare him to shoot the three, Wright’s still shooting 52.2 percent from the field.

Oregon was picked to finish eighth and wound up tied for second, so from that angle this is an easy choice. And with their resume being what it was in early February, Altman’s Ducks arrive in Las Vegas as a lock to return to the NCAA tournament.

York was at the line for two free throws with Arizona trailing 57-55 with 1:39 remaining, less than 20 seconds after a Brandon Taylor free throw gave the Runnin’ Utes the lead. After making the first free throw, York followed his own miss to give the Wildcats a lead they would not relinquish. That sealed the game and another Pac-12 title for the Wildcats.