A year after the Atlantic 10 got six bids to the NCAA tournament, the conference took a major hit in 2014-2015. George Washington didn’t end up being as good as expected, UMass entered a rebuilding year with the loss of Chaz Williams, Saint Louis lost everyone, and St. Joe’s and La Salle both had down years.

Early in the season, it looked as if VCU was going to run away with the conference title, but Briante Weber shredded his knee in February, which opened the door for teams like Davidson, Dayton, Richmond and Rhode Island to finish in the top four. If there’s anything that this season in the conference taught us, it’s that the A-10 tournament is going to be wide-open, as a number of the conference’s best teams are looking to secure at-large bids or need the automatic bid outright. 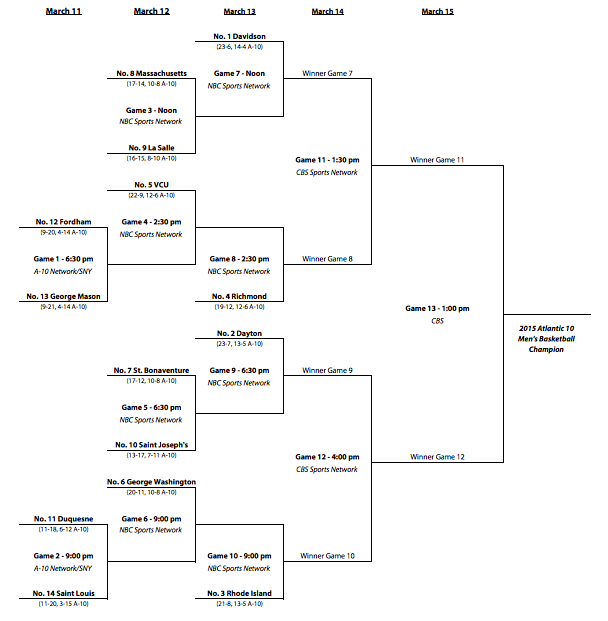 The Wildcats were the A-10’s outright champs this season, finishing 12-4 in the league with exactly half of those losses coming while star guard Jack Gibbs was laid up with a knee injury. Their only losses while at full strength this season? At VCU, at Virginia, at Richmond and vs. North Carolina.

And if they lose?: Dayton

The Flyers dismissed their only two scholarship players over 6-foot-6 back in December, meaning that they were left with just six players and no big men. But that didn’t stop Archie Miller from finishing second in the conference and 22-7 overall.

The Spiders are a tough team to peg. They swept VCU this season, but they also finished just 10-6 against the rest of the conference. Their back court of Kendall Anthony and Shawn’Dre Jones is difficult to matchup with and talented enough to lead them on a run through Brooklyn.

I still think that the Colonials are a dangerous team. Kevin Larsen can be dominant on the block, Patricio Garino creates so many problems defensively and Yuta Watanabe is going to be a star. Mike Lonergan’s club has been in a rut for the last month, but remember, this is still the team that beat Wichita State in December.

Kalinoski finished the season averaging 16.9 points, 4.2 assists and 5.7 boards while shooting 43.3 percent from beyond the arc. He spent most of the year as the best player on the league’s most entertaining team, stabilizing things while Jack Gibbs dealt with his knee injury.

If you want to try and differentiate between the job that these two have done this season, good luck. McKillop led the Wildcats to the outright Atlantic 10 title in their first season in the conference, as they moved from the SoCon for this season. And Miller? He managed to lead the Flyers to the No. 2 seed in the A-10 tournament despite playing with just six scholarship players for much of the season.

Near the end of the first installment of the VCU-Richmond rivalry this season, Briante Weber’s knee buckled on him as he came to a jump-stop in the middle of the lane. The injury was not initially thought to be too bad, but further testing revealed catastrophic damage: Weber had torn his ACL, MCL and meniscus. His season — and his college career — was over, and since then, VCU’s been careening off the rails. They are 5-6 since the injury, falling to the No. 5 seed in the Atlantic 10 tournament, a conference they were in complete control of before he was hurt. Weber was such an important piece for the Rams, the sparkplug of their ‘Havoc’ defense, and losing him has changed that team.

CBT Prediction: VCU finds their rhythm and knocks off Rhode Island in the final.