The Southland may be a one-bid league, but they have one of the best mid-major teams in the country in Stephen F. Austin and plenty of star power throughout the league. The Lumberjacks will look to make the Big Dance for the second consecutive season, as they’ve only dropped one Southland game in the last two seasons while they had a 19-game winning streak at one point during the year. But Brad Underwood’s team will be challenged by a balanced and talented Sam Houston State team and a No. 3 seed in Texas A&M Corpus-Christi that beat both the Lumberjacks and Bearkats this season. And you can’t forget about No. 4 seed Northwestern State, who has one of the nation’s best set-up guys in Jalan West (tied for national lead with 7.5 apg) and the nation’s second-leading scorer in sophomore Zeek Woodley (22.4 ppg) 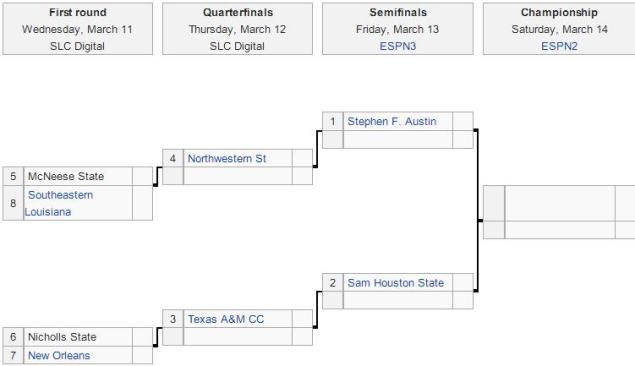 After going unbeaten in the Southland last season, Stephen F. Austin is once again a strong contender to take the auto bid for the conference. The Lumberjacks took home the Southland regular-season crown for the third consecutive season and they only have one conference loss in the last two years.

And if they lose?: Sam Houston State

The Bearkats went 15-3 in league play and only lost to Texas A&M Corpus-Christi outside of being swept by Stephen F. Austin. Southland Defensive Player of the Year Michael Holyfield is a force inside and he leads a balanced team that has a remarkable seven scorers averaging between 7.6 and 10.9 points per game this season.

Assuming more of a leadership role in his junior season, Walkup became the leading scorer (15.5 ppg) and rebounder (6.5 rpg) at Stephen F. Austin while also leading the team in field-goal percentage (56 percent). Walkup has now been apart of three Southland regular-season titles in his three years with the program.

The second-year head coach of the Lumberjacks had another remarkable season, as he has Stephen F. Austin in position to potentially be in another NCAA Tournament. Underwood also has the most wins of any second-year coach in NCAA history, as his 59 wins in two seasons surpassed North Carolina’s Bill Guthridge.