Since the beginning of the season, everyone knew that the Big Ten was Wisconsin’s to lose after returning four starters from last season’s Final Four team. Now that senior center Frank Kaminsky has emerged as the Player of the Year, the Badgers solidified themselves as a top-ten team all season and won the league by two full games over Maryland.

Speaking of Maryland, the Terps have been one of the biggest surprises in college basketball this season and they’ve emerged as a top-ten team and the Badgers’ biggest threat in the tournament. Mark Turgeon’s team is the only team in the Big Ten to beat Wisconsin with Frank Kaminsky this season and they know how to win in tight ball games thanks to their tremendous 75 percent free-throw shooting.

From there, the Big Ten gets a little muddy in the middle. Michigan State, Purdue, Iowa and Ohio State all finished within a game of each other in the league and Indiana and Illinois finished at .500 by faltering a bit down the stretch. Michigan also somehow finished 8-10 in the league despite significant injuries to Caris LeVert and Derrick Walton.

Just as we saw to start the season, Wisconsin is the the heavy favorite to win in Chicago. Let’s see if the Badgers can hold true on that like in the regular season and build some momentum towards the NCAA Tournament and a potential No. 1 seed. 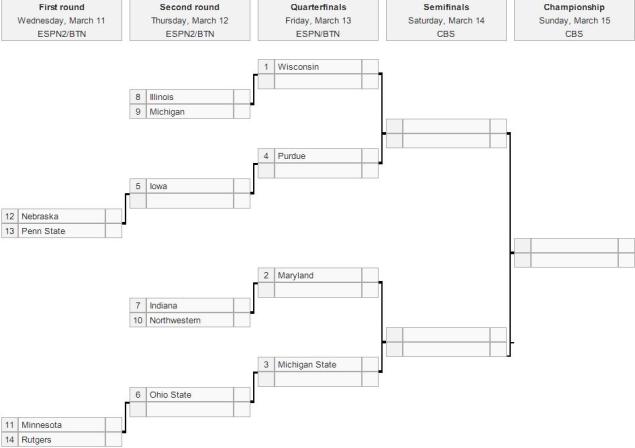 With a record of 16-2, the Badgers won the league by two full games. Senior center Frank Kaminsky is the leader for Player of the Year and along Sam Dekker and Nigel Hayes, the trio forms a tremendously versatile and talented frontcourt. Sophomore Bronson Koenig has emerged as a steady replacement for injured senior Traevon Jackson and senior Josh Gasser can hit 3-pointers and also makes free throws at an 85 percent clip. As a team, Wisconsin is 13th in the country at 75 percent from the charity stripe. When the get ahead, they know how to close.

And if they lose?: Maryland

The Terps have ascended to No. 8 in the country and recently defeated the Badgers at home. Like Wisconsin, Maryland is great from the free-throw line, where they actually are better than the Badgers and rank No. 12 in the country. Freshman guard Melo Trimble is an NBCSports.com All-American this season as he leads a trio of talented scorers along with senior guard Dez Wells and junior forward Jake Layman. It’s the first time Maryland will play in the Big Ten Tournament and it’ll be interesting to see how they handle it. They’ve been one of the pleasant surprises of college basketball this season.

Winners of six games in a row, Iowa is playing with a lot of confidence heading into the Big Ten Tournament. Senior forward Aaron White has put up some stellar performances and he’s surrounded by an experienced and deep team.

The front court for the Buckeyes can be dreadful at times, but freshman guard and NBCSports.com first-team All-American D’Angelo Russell has been sensational this season. Russell is talented enough to take a game over and senior guard Shannon Scott can also set up others for easy baskets.

What can be said about Kaminsky that hasn’t already been said this season? He’s been remarkable in nearly every facet of the game and somehow exceeded expectations entering the year. The senior led Wisconsin in points, rebounds, assists, steals and blocks and shoots 41 percent from 3-point range.

Before the season, Turgeon was a major candidate on the hot seat after losing five players to transfer. Now? He’s coaching a top-ten team in his first season in a brand-new league. Tremendous turnaround year for Turgeon and the Maryland program and the head coach deserves a lot of credit for melding a talented freshman class together with the returning pieces he had left.

CBT Prediction: Wisconsin takes down Maryland as the Big Ten’s two best square off in the title game.