Last season, the Big East had zero teams get out of the first weekend of the NCAA tournament. The lack of success in March led to questions in November regarding the strength of the conference. The Big East relaunch entered its second season with many expecting a shell of its former self. That wasn’t the case as Big East teams rallied off impressive non-conference wins, one after the other.

Less than a week before Selection Sunday — even with a February meltdown from Seton Hall — the Big East is expecting 60 percent of its league to be in the field of 68, including Villanova, a No. 1 seed in the latest College Basketball Talk bracket.

Before the Big East members can go dancing, they’ll have to slug it out in the World’s Most Famous Arena.

The Wildcats enter as the favorite, riding a 12-game winning streak, but hanging over their heads will be the shortcomings of last spring. Challenging Villanova will be Georgetown, Butler and Providence. However, St. John’s, a team of mismatches, will be playing on its home floor.

With two play-in games to be decided, the madness begins in quarterfinals, live from New York, with everyone eyeing a chance to play Saturday night. 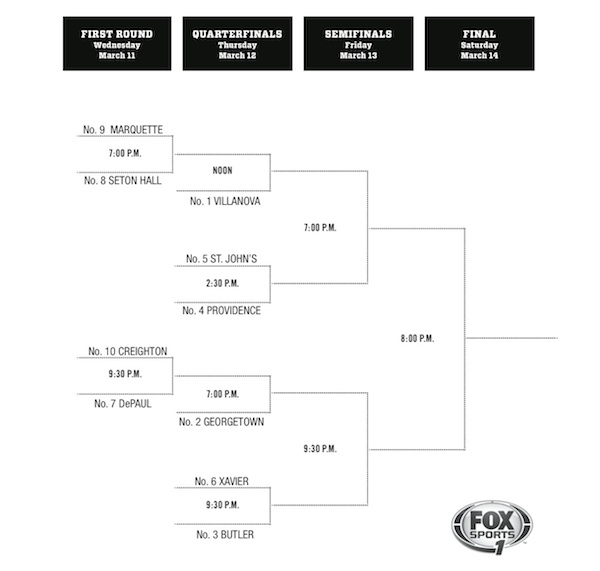 The Wildcats haven’t lost since Jan. 19, a blowout loss to Georgetown. Villanova has rallied off 12 straight heading into Madison Square Garden, including double-digit wins over Georgetown, Providence (twice) and St. John’s. Villanova was the top seed in the Big East Tournament last year, only to get knocked out by Seton Hall in the quarterfinals. Villanova went on to lose in the Round of 32 — to eventual champion UConn — in the NCAA tournament. You think Jay Wright’s team wants to change its postseason perception?

And if they lose?: Georgetown

The Hoyas took care of business on Saturday and got some help to secure the No. 2 seed. D’Vauntes Smith-Rivera, who missed Saturday’s win over Seton Hall will also be back in the lineup this week. Georgetown is the last team to beat Villanova.

After digging itself into a whole to begin conference play, St. John’s was able to finish in the top half of the league standings. The Red Storm play small, which can cause problems for the opposition, but are they healthy?

The Musketeers are likely in, but a few wins in the Big East Tournament wouldn’t hurt either. Xavier split the regular season series with quarterfinal opponent Butler and swept potential semifinal opponent Georgetown.

Two years had gone by and we had only seen a glimpse of Kris Dunn, the former McDonald’s All-American. Finally healthy, the Providence guard has played his way into All-American consideration, averaging 15.5 points, 7.4 assists — ranks him third nationally — 5.6 rebounds and 2.8 steals — fifth nationally. Turnovers are an issue, but no one in the Big East can take over a game like Dunn can.

Holtmann still had the interim head coaching title until early January. The second-year assistant was thrusted into the head coaching role after Brandon Miller took a leave of absence. He responded with a November upset of No. 5 North Carolina at the Battle 4 Atlantis and ended with a share of second-place in the conference standings.

Defining moment of the season: Butler upset No. 5 North Carolina

Arguably the most important non-conference win for the Big East was unranked Butler over then-No. 5 North Carolina in the Battle 4 Atlantis. The victory was big for the perception of the new Big East and also the state of the Butler program in the post-Brad Stevens era.

CBT Prediction: Villanova has been too good down the stretch, taking the Wildcats over Butler.