It was another year in which the Big 12 clobbered each other in conference play and we can’t really get a feel for how good this league is going into the postseason. When you also consider that conference champion Kansas ended the regular season without Cliff Alexander (eligibility concerns), Perry Ellis (sprained knee) and Brannen Greene (suspended) and this Tournament looks wide-open.

That notion is aided by the fact that each team in the tournament has to win at least three games to win the championship. The Big 12 Conference Tournament doesn’t feature double and triple byes like some conference tournaments. Only the bottom four teams have play-in games for the right to play in the quarterfinals.

Coming off of the win over Kansas, Oklahoma is riding high and the Sooners are the No. 3 seed with the conference’s Player of the Year in Buddy Hield. The junior guard is one of the best two-way players in the country and Oklahoma has Final Four ability if they get rolling. No. 2 seed Iowa State will also be a team to track, but they could get a tough game against Texas in the quarterfinals.

And you can’t forget about Baylor and West Virginia, who matched up in the quarterfinals and are both ranked in the top 20. Even teams like Oklahoma State and Kansas State could string together a few games and make a run in this tournament. 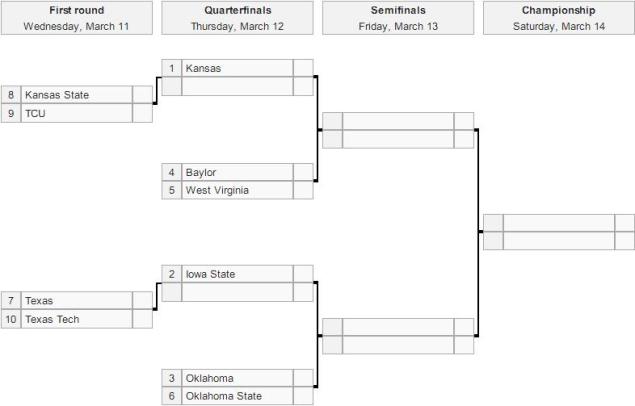 The Jayhawks managed to win the Big 12 for the 11th consecutive season and they stayed closed with Oklahoma despite missing Cliff Alexander, Perry Ellis and Brannen Greene. Kansas likely gets Greene back for the Big 12 Tournament and point guard Frank Mason III will be key for the Jayhawks.

And if they lose?: Iowa State

The Cyclones have a high-octane offense, led by Georges Niang and can put up points in a hurry against nearly any team in the country. The question becomes how the Cyclones play away from Hilton Coliseum? Iowa State was mediocre on the road this season and also lost neutral-court games to Maryland (in Kansas City) and South Carolina. Can they stay consistent enough on the defensive end to win three tough games?

The Longhorns finished 8-10 in the conference but have enough talent to win the tournament if they can continue the mini two-game winning streak they’re riding. While many of the Big 12’s other teams are comfortably in, the Longhorns could really use some more wins for some more breathing room.

Bruce Weber’s team might be below .500 but they swept Oklahoma and own wins over Kansas and Iowa State and sophomore guard Marcus Foster can still get hot and carry an offense.

One of the best two-way wings in the country, Hield coupled good scoring numbers (17.4 ppg, 42% FG, 38% 3PT) and a solid presence on the defensive end. A second-team NBCSports.com All-American, Hield also averaged 5.5 rebounds per game and 1.4 steals per contest.

You can also make a strong case for Bob Huggins at West Virginia, but he was returning a Player of the Year candidate in Juwan Staten. Baylor’s ascension into the top-25 this season seemed even more surprising than West Virginia’s and the Bears did a great job of finding new go-to players and rebuilding a talented frontcourt.

CBT Prediction: Oklahoma rides the momentum of the win over Kansas and wins the Big 12 Tournament.