The ACC turned into one of the best conferences in college basketball this season, as five different teams have held top ten rankings during the season. As it stands, two of the top five seeds have a real chance to finish the month in the Final Four, while three more could very well find themselves in the second weekend of the Big Dance.

Duke and Virginia look like they’ll end up being No. 1 seeds by the time that the brackets are released on Selection Sunday, although that’s far from a given at this point. Louisville, North Carolina, Notre Dame and N.C. State are all playing for seeding at this point, while Miami and, potentially, Pitt have a chance to earn an at-large bid by the time it’s all said and done. 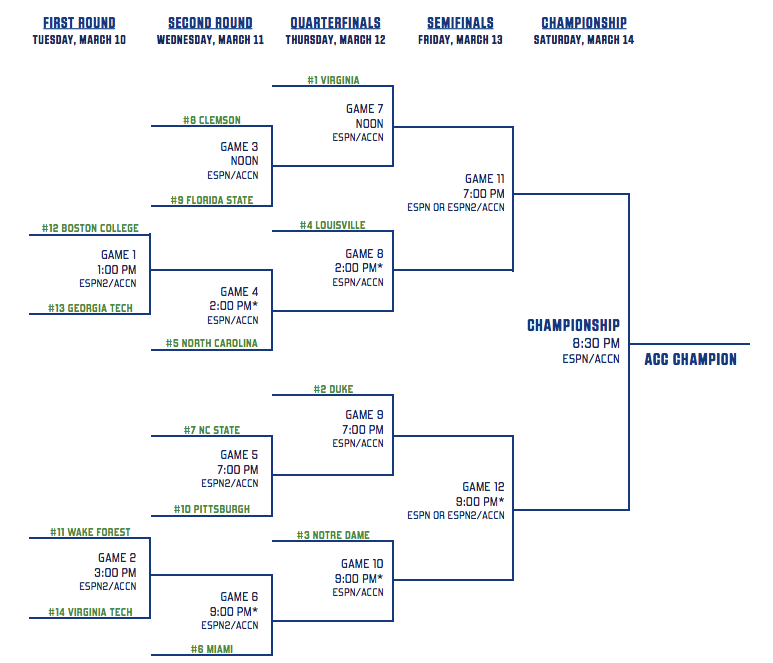 The Cavaliers rolled through the ACC, winning their second straight outright league title while playing for nearly a month without Justin Anderson, their all-american caliber wing. There’s no guarantee that Anderson will be back in the lineup this week, however, but even if he’s not, UVA has still proven to be the best defensive team in the country.

And if they lose?: Duke

There isn’t a team in the country who has as many players that can completely take over a game as the Blue Devils. We all know about Jahlil Okafor, but Tyus Jones was the star in both wins over North Carolina, Quinn Cook was the hero in their blowout win against Notre Dame and Justise Winslow can be nearly unstoppable when he’s allowed to get out in transition. Duke has depth and defensive issues, but when their offense is clicking, they can beat anyone.

I know that they are playing without Chris Jones, but the Cardinals are coming off of a win over Virginia on Saturday. Montrezl Harrell and Terry Rozier are a terrific 1-2 punch, and when Wayne Blackshear, Quentin Snider and company are hitting their threes, this team is dangerous.

The Wolfpack have been annoyingly inconsistent this season, but they have beaten Duke, North Carolina, Louisville and Syracuse — all four coached by Hall of Famers – this season.

There is a ton of talent in the ACC this season, but Okafor is the easy pick for Player of the Year. No one else in the league is as unstoppable as he is, and while he does have some issues — his free throw shooting and defense, for example — I don’t think there is any question who the best player was.

Virginia doesn’t have a consensus top 50 recruit on their roster and Justin Anderson is their only potential NBA Draft pick. Yet the Cavs only lost twice this season — once on a flurry of threes from Duke, once on a jumper from Mangok Mathiang of all people — despite playing without Anderson for more than a month. The only reason he’s not the National Coach of the Year is a man by the name of John Calipari.

Defining moment of the season: Duke’s comeback at Virginia