Georgia State and their loaded back court was thought to be the overwhelming favorite to win the Sun Belt regular season title, especially after Shawn Long spent much of the early part of the season battling injuries. And while the Panthers eventually won their second straight title, it took collapses from UL-Monroe and Georgia Southern in the final two weeks of the season for that to happen. Is this the year that Ron Hunter gets his team to the NCAA tournament? 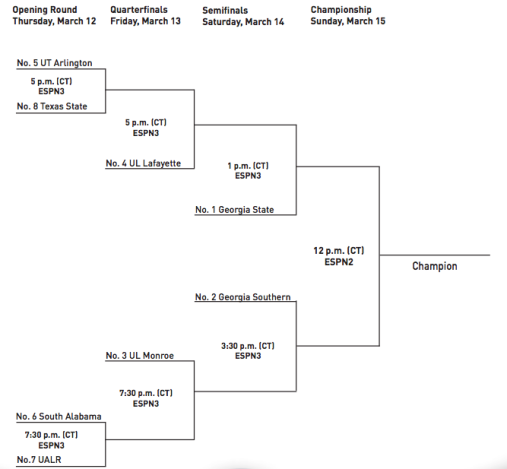 The Panthers weren’t as dominant as they were in the Sun Belt a season ago, but they won their second straight league title thanks to a win over Georgia Southern on the final day of the regular season. They’re led by of the best back courts in America: R.J. Hunter, Ryan Harrow and Kevin Ware. GSU certainly has the talent to pull an upset if they get to the NCAA tournament.

And if they lose?: Georgia Southern

Georgia Southern, playing in the Sun Belt for the first time, ended up challenging the Panthers to the very end, losing to them in what turned out to be the regular season title game. Led by Jelani Hewitt and Trent Wiedeman, the Eagles will be looking to bounce back after losing two of their last three games.

Harrow finished the season as the league’s leading scorer and was second in assists, which isn’t bad for a player that was supposed to be the second-best guard in his back court.

Byington led the Eagles to a second-place finish in the Sun Belt in the program’s first season in the league, improving despite the fact that they struggled in their final season in the CAA.

CBT PREDICTION: Georgia Southern gets another crack at Georgia State and knocks them off in the title game.