LeVelle Moton has turned North Carolina Central into the MEAC’s best program. He’s 46-2 in the last three seasons in league play, and he led the Eagles to a perfect conference season. They’re the clear favorite to make another run to the NCAA tournament, but one thing about March that we all know to be true: favorites don’t always make it. 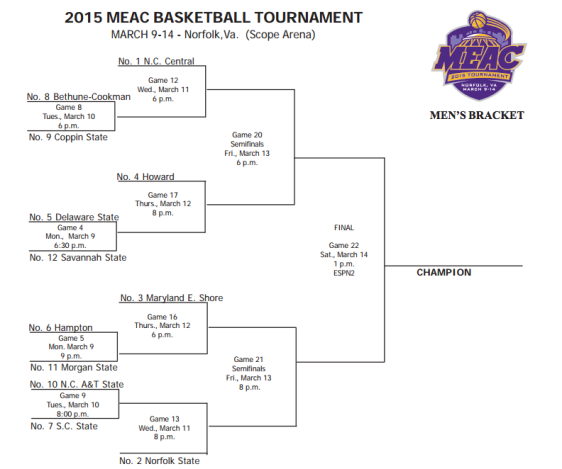 The Eagles once again rolled through the MEAC season, finishing the year 16-0 and winning the regular season title by four games. NC Central has not lost a conference games since January of 2014, their first league last season. That’s 34 straight, if you’re counting at home. Yeah, I’d say they’re the favorite.

And if they lose?: Norfolk State

The Spartans last made the NCAA tournament in 2012, when they knocked off No. 2 seed Missouri in the opening round. The Spartans may not be as good as that team — Kyle O’Quinn played in the NBA after leaving school — but this group can make a run through the conference tournament.

Gray finished the season as the nation’s leading rebounder, averaged 12.4 points, 12.4 boards and 2.8 blocks while posting 17 double-doubles on the year.

Moton has turned NC Central into a powerhouse in the MEAC. Not only did they roll through a 16-0 regular season in league play, they’ve now won 34 straight games against conference opponents and are 46-2 in MEAC play in his tenure. That’s good, right?