All 12 of the MAC’s members lost at least six conference games during the conference’s 18-game league schedule. So, in other words, this is shaping up to be one of the most unpredictable conference tournaments of 2015. The top four seeds in the field — Central Michigan, Buffalo, Kent State and Toledo were all within a game of each other in the standings this season. 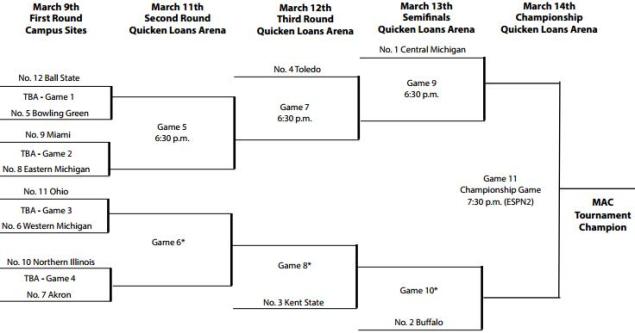 Where: Campus sites for first round, Quicken Loans Arena in Cleveland for the rest

Winners of six consecutive games entering the MAC Tournament, the Bulls have a potent duo in forward Justin Moss and guard Shannon Evans and Bobby Hurley’s team appears to be peaking at the right time. It also helps that Buffalo doesn’t have to play until the tournament’s semifinals and they swept potential semifinal opponent Kent State during the regular season.

And if they lose?: Central Michigan

While the Chippewas aren’t as hot as Buffalo, they are the No. 1 seed in the tournament and also get the advantage of not playing until the semifinals. Central Michigan also owns a pair of season sweeps over the Bulls and Toledo during the season, the two teams they could face in the MAC Tournament if the bracket holds to form.

Entering 2014-15, the Bulls had the unenviable task of replacing senior forward Javon McCrea, the MAC’s reigning Conference Player of the Year. Enter Moss, who led the league in scoring (18.4 ppg) and rebounding (9.3 rpg) this season in an increased role after only playing a little over nine minutes per game last season. Remarkably consistent, Moss scored in double figures in all but three games during the regular season.

The Chippewas were a MAC afterthought entering the season, as they were picked to finish fifth in the West Division in the preseason coaches’ poll. Central Michigan defied preseason expectations by finishing as the No. 1 overall seed in the conference tournament. With the league’s top offense and a much-improved defense — from last season’s last-place defense — Central Michigan went from 10-21 to 22-7 in one season.