North Dakota State was one of the best stories of last year’s NCAA tournament, a rag-tag group of kids that won a game in the NCAA tournament as a No. 12 seed while being led by the nation’s most quotable head coach in Saul Phillips. Despite replacing everyone, the Bison earned a share of the Summit regular season title with South Dakota State, who won 12 of their last 14 games. 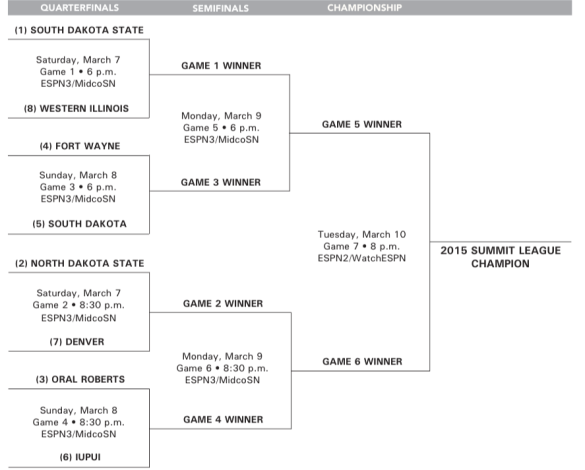 The Jackrabbits lost their first two games in league play, road trips to NDSU and Denver, before winning 12 of their next 13. They whiffed on a chance to take home the outright league title with a loss at South Dakota in the finale, but the bottom line is there wasn’t a hotter team in the conference the last two months. Florida transfer Cody Larson is the best big man in the league, while Wisconsin transfer George Marshall and Deondre Parks flank him on the perimeter.

And if they lose?: North Dakota State

The Bison finished tied for the regular season title in what was supposed to be a rebuilding year. They not only lost Taylor Braun, the league’s Player of the Year, and Marshall Bjorklund, they had to replace head coach Saul Phillips. But thanks to a Player of the Year season from Lawrence Alexander, NDSU was able to work through the changing of the guard.

Alexander had a monster season to lead the Bison to a share of the league title, averaging 19.1 points while shooting 44.5 percent from three. He went for 30 twice this season, and can take over a game like no one else in the league.

Richman is a fairly obvious pick for the reasons explained above. The Bison had to replace their top three scorers from last season, including the league Player of the Year and a first team all-conference player, while changing head coach. Winning a share of the league title under those circumstances in impressive.

CBT PREDICTION: North Dakota State knocks off South Dakota to make it back to the NCAA tournament.