The SoCon looks quite a bit different than it has in past seasons, as Davidson and the College of Charleston are no longer in the league while new additions like Mercer and East Tennessee State have made an immediate impact. And while there has been some turnover in the membership, the league’s power still ended up being Wofford, as many predicted prior to the season. The Terriers are a veteran-laden group, but they split their two games with Chattanooga, who finished in second in the conference, this season. 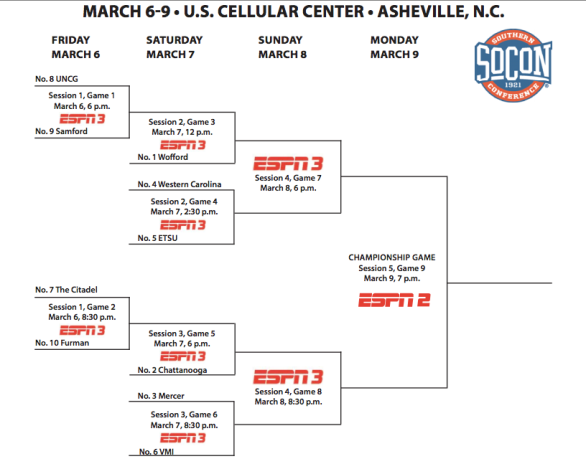 The Terriers returned essentially their entire roster from last season’s NCAA tournament team, and it showed during the season. After notching a number of quality non-conference wins — Iona, Charleston Southern, N.C. State — Wofford ended up winning the outright SoCon title. Wofford is led by league Player of the Year. Karl Cochran.

And if they lose?: Chattanooga

Shaka Smart protégé Will Wade has turned the Mocs into one of the most promising mid-major programs in the country. The goal is to eventually run ‘Chaos’, which is the mid-major version of VCU’s ‘Havoc’, and while they aren’t completely chaotic just yet, this is still a team that has won quite a few games in the past two years. The addition of VCU transfer Justin Tuoyo this season was huge.

A 6-foot-1 guard, Cochran was the spark for Wofford’s offense this season. He averaged 15.0 points, 5.8 boards, 2.8 assists and 1.8 steals on the season while shooting 37.5 percent from three as the team’s only real perimeter threat.

Young is the easy pick here, as he was able to back up the preseason projections and win the league’s regular season title. His job was made easier by the fact that he had a veteran team coming off of a league tournament championship from last season.

CBT PREDICTION: Wofford returns to the tournament by beating Mercer in the finals.