The CAA was one of the wilder league races of the season. Heading into the final week of the season, there were four teams tied for first place in the conference. In that final week, all four teams split their two games, meaning that there was a four-way tie for first place: William & Mary, UNC Wilmington, James Madison and Northeastern. If the year should tell you anything, it’s that the conference tournament is going to be wild. 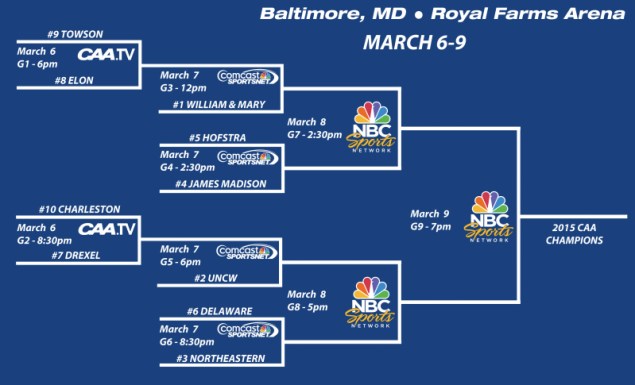 For me, William & Mary is the favorite to win what should be a wild CAA tournament, and the reason that I’ll pick them here is, simply, because they have the best player in the conference. No one can take over a game like Marcus Thornton can, and if the Tribe are ever going to get that elusive first NCAA tournament bid, it’s going to be this season.

And if they lose?: UNC Wilmington, Northeastern and James Madison

Your guess is as good as mine here. James Madison has played well despite losing their most talented player midway through the season. Northeastern was a favorite in the preseason that earned their share of the league title. And UNCW? They were led by a Rick Pitino disciple to a surprising first place finish.

Thornton was the most dynamic player in the conference this season, helping to lead the Tribe to a four-way tie for first in the conference. Thornton averaged 19.6 points this season, shooting 40.9 percent from three while carrying his team for much of the season. Thornton is the kind of player that can lead the Tribe through the league tournament and to a win in the NCAA tournament.

No one expected much from the Seahawks this season, as they were coming off of a year where they finished just 9-23 overall and 3-13 in the league. But Keatts turned things around, as UNCW finished in a four-way tie for first.

CBT PREDICTION: William & Mary reaches their first NCAA tournament with a win over Delaware in the final.