After being alone at the top in recent years, Wichita State has a nearly equal rival in Northern Iowa this season. Both teams are 27-3 and ranked in the top 15 as the Valley will surely get two teams in the NCAA Tournament. But first comes Arch Madness, and a few teams like Illinois State, Indiana State and Evansville are capable of stringing together some wins and stealing a bid. 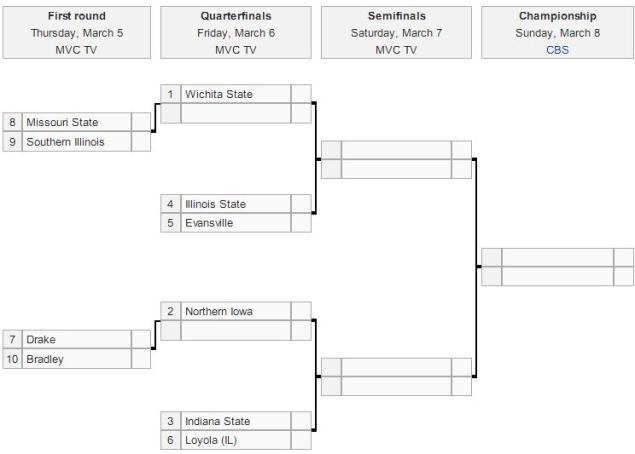 The Shockers enter Arch Madness as the No. 1 seed. The trio of Fred Van Vleet, Ron Baker and Tekele Cotton has won a lot of games in Saint Louis the last few years. Gregg Marshall’s team should be favored again after a strong recent showing at home against Northern Iowa. If the basketball gods are looking down on his, they’ll grant us a grudge match between the Shockers and Northern Iowa. Back in January, the Panthers handed Wichita State their only loss of the Missouri Valley season.

And if they lose?: Northern Iowa

Also at 27-3 this season are the Panthers, who are the No. 2 seed and might have a more favorable draw on their side of the bracket. Led by Player of the Year Seth Tuttle, Northern Iowa is deep, balanced and experienced and are looking to add some postseason success to an otherwise tremendous season.

The 6-foot-8 senior is third in the conference in scoring (15.6 ppg) and rebounding (6.6 rpg) while placing fourth in assists (3.3 apg) and first in field-goal percentage (63 percent shooting). He’s also improved to 44 percent as a 3-point shooter and been consistent for much of the season for a 27-win team.

Gregg Marshall deserves a ton of crediting for maintaining Wichita State as a top-15 program, but Jacobson took a program barely above .500 a year ago and made them into a top-15 team with a chance at making the second weekend of the NCAA Tournament.