After rolling through the Ohio Valley Conference unscathed, the Murray State Racers enter the conference tournament as the heavy favorite. Led by Player of the Year Cameron Payne, Murray State enters the month of March as one of the most dangerous teams in the country, having won 24 consecutive games. It doesn’t hurt that they only have to win two games to get themselves into the Field of 68. The OVC has one of the easiest conference tournament paths for a No. 1 seed, as they get a double bye and face a No. 4 seed, at best, in the opening game. Eastern Kentucky and Belmont could challenge on the other side of the bracket, but look for Steve Prohm’s team to become a dangerous Cinderella candidate. 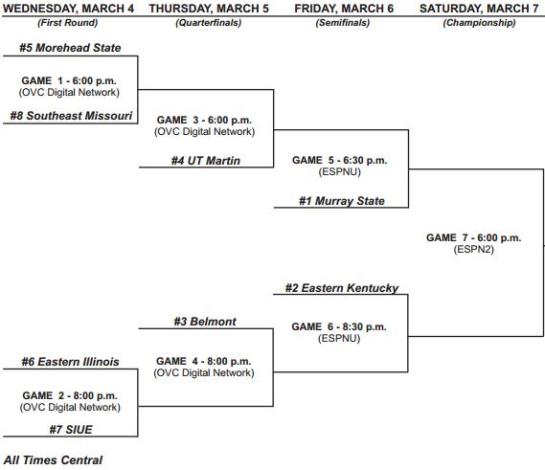 Winners of 24 straight games, the Racers look like one of the nation’s best mid-major teams and a serious threat to win a NCAA Tournament game if they make the field. Cameron Payne is a star at guard and Jarvis Williams is a great second option inside.

And if they lose?: Eastern Kentucky

The Colonels made the NCAA Tournament last season and also get the benefit of the double-bye straight into the semifinals as the No. 2 seed. Eastern Kentucky also came closed to knocking off Murray State this season in the OVC, taking the Racers to overtime on Jan. 29 before losing by seven. With the duo of Corey Walden and Eric Stutz — both top-five scorers in the conference — the Colonels have reliable scorers.

An obvious choice, as the 6-foot-2 sophomore was the conference’s leading scorer (20.2 ppg), second in assists (5.7 apg) and third in steals (2.0 spg). Payne is also shooting 46 percent from the field and 37 percent from 3-point range and contributing 3.6 rebounds per game.

Prohm took the Racers to the Round of 32 in his first season but he did something this season that even Mick Cronin and Billy Kennedy had never done at Murray State: go unbeaten in conference play. At 16-0, the Racers were the class of the league and Prohm has done a tremendous job rebuilding the program after that initial NCAA Tournament appearance.