St. Francis of Brooklyn is the oldest college basketball program in New York City, dating all the way back to 1896. They also happen to be one of just five programs that have been in existence since the NCAA tournament began in 1948 to never take part in the event. That could very well change this year, as the Terriers head into March having clinched the outright regular season title two weeks ago. They’ll be tested — Bryant has the league’s best scorer, Mt. St. Mary’s is coming off of a title run last season, and Robert Morris is the NEC’s best program — but they’ll also be favored throughout, playing every game at home. Is this the year the streak ends? 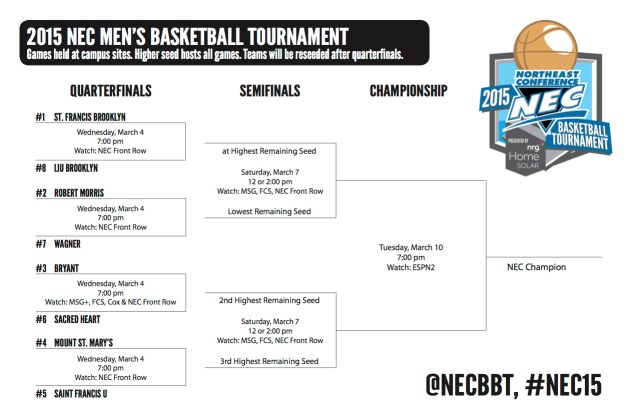 Where: Campus sites (better seed in all rounds, reseeded after quarterfinals)

The Terriers were the best team in the conference this season. They also have the league’s best front court player in Jalen Cannon as well as the conference’s best guard in Brent Jones. But there are two things to note: St. Francis split with the other three teams at the top of the conference, and they were just 9-1 in games decided by single digits. They win close games, but they’re not steamrolling the league. They’re beatable.

And if they lose?: Robert Morris

Andy Toole has kept Robert Morris in the conversation as one of the nation’s best mid-major programs, and while they’re not the favorite to win the automatic bid, they’re anything but a pushover. Bobby Mo has had some roster turnover in recent years, but they have three guys this year — Rodney Pryor, Marcquise Reed and Lucky Jones — who can take a game over.

Cannon will go down as one of the all-time greats in the NEC, finishing his career as the all-time leading scorer in St. Francis history and one of just two players to ever score 1,500 points and grab 1,000 rebounds in conference history. Cannon averaged 16.5 points and 10.2 boards this season.

The Terriers were predicted to win the NEC this season, but I’m not sure anyone expected them to clinch the regular season title with two weeks remaining. Playing all three rounds of the league tournament at home will make SFNY the favorite to win their first ever NCAA tournament berth.