The Big South had one of the most entertaining conference races in college basketball, as at one point in February, seven teams were tied for first place. By the end of the season, two teams — Charleston Southern and High Point — finished 13-5 in league play with the Buccaneers earning the top seed. But given the way in which this season played out, it would be more surprising if the Big South tournament was all “chalk.” 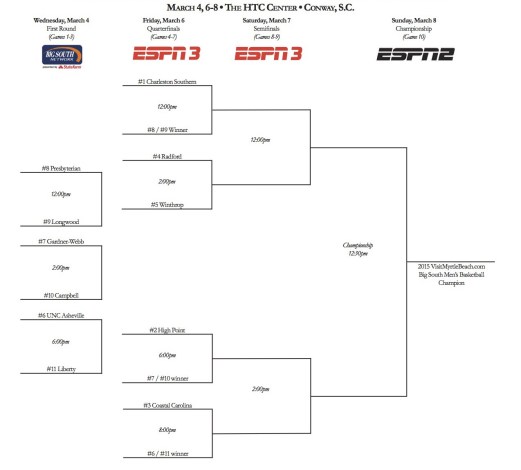 The Panthers finished tied for the Big South regular season title, with a triple-overtime loss to the Buccaneers in the regular season finale being the reason why they didn’t win it outright. Of course high-flying forward John Brown is the headliner for Scott Cherry’s team, but forward Lorenzo Cugini and guard Devonte Wallace are both averaging ten points per game and four players average at least two assists per contest.

And if they lose?: Charleston Southern

With Saah Nimley leading the way the Buccaneers average 74.5 points per game, and in conference games, Charleston Southern was tops in offensive efficiency. This a group that enjoys taking threes, as they attempted (and made) more three-pointers than any team in the Big South. And keep an eye on Will Saunders (13.1 ppg) and Arlon Harper (13.0), as both are solid supplementary scoring options alongside Nimley.

The 5-foot-8 senior guard averaged 21.5 points, 4.1 rebounds and 4.1 assists per game for Charleston Southern, and he produced more games of 30 points or more (seven) than single-digit outings (four). Included in Nimley’s season is a stretch of four straight games in which he scored 30 points or more.

Radebaugh’s Buccaneers were picked to finish fifth in the preseason poll, but they managed to win 13 conference games and a share of the regular season crown. And while Nimley is the headliner, four others are averaging at least eight points per game with Arlon Harper (13.0 ppg) and Will Saunders (13.1) also averaging double figures.