The last time a No. 1 seed in the America East Tournament punched its ticket to the NCAA tournament was 2009. Albany, which cruised through league play at 15-1, looks to end that trend and reach the program’s third consecutive NCAA tournament. Standing in the way of the Great Danes is Stony Brook, the only team to beat them in America East play. The Seawolves have failed to get over the conference tournament hump, losing in three of the last four America East title games.

The tournament format has changed for the America East this spring. All games will be played on the higher seed’s court. 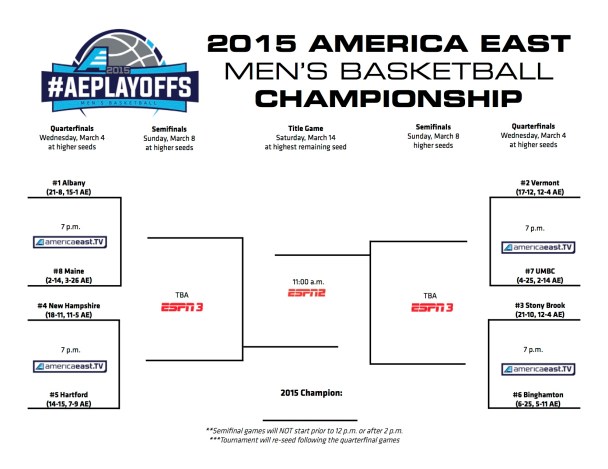 A three-point loss to Stony Brook on Feb. 17 is the only thing that kept the Great Danes from running the table in conference play. Albany has three players scoring in double figures — Sam Rowley, Peter Hooley and Evan Singletary. The Great Danes will also have home court for as long as they are in the tournament.

And if they lose?: Stony Brook

Could this be the year the Seawolves go dancing? Stony Brook lost to Albany in the finals last year and serve as the chief competition to the Great Danes again this March. The Seawolves have two talented juniors in Jameel Warney, who averaged a double-double this season and Carson Puriefoy.

The 6-foot-8 forward averaged 16.3 points, 11.4 rebounds and 2.4 blocks per game, tops in the American East in each category. The nation’s fifth leading rebounder has the Seawolves in second-place, once again eyeing that elusive automatic NCAA tournament bid.

Coach of the Year: Will Brown, Albany

For the fourth time in his career at Albany, Will Brown led the Great Danes to a 20-win season. He had the league’s most efficient offense and third-most efficient defense, according to kenpom. The Great Danes also posted a 15-1 America East record with eight of those wins coming with Peter Hooley out of the lineup.