The Horizon League race was an entertaining one, as it wasn’t decided until the final week of the season with Valparaiso winning the crown. The Crusaders won’t have to leave home as a result, but they won’t lack for challengers in the race for the automatic bid. Green Bay is looking to erase bad memories of a loss in last year’s tournament, and both Oakland and Cleveland State are formidable as well. Of the four other teams in the tournament (Milwaukee’s ineligible for APR reasons), Detroit may be best equipped to go on a run thanks to the presence of Juwan Howard Jr. 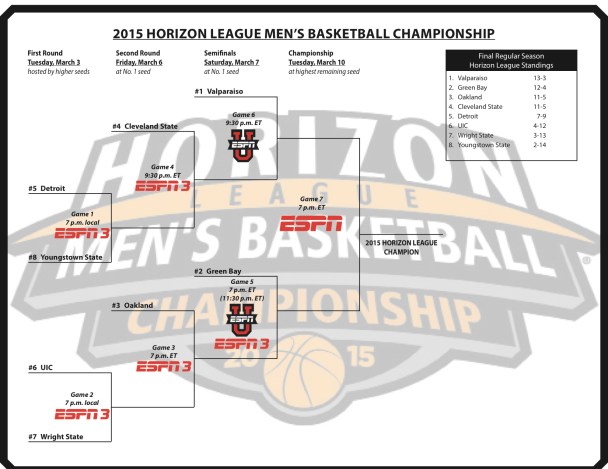 Thanks to their regular season title the Crusaders are the top seed, meaning that they host the second round and semifinals and also receive a bye into the semis. While home court certainly helps (they’re 8-0 in league home games this season), Valparaiso’s defense is another reason why they should be seen as the favorites. Opponents are averaging just 59.9 points per game and shooting 38.2% from the field, with both numbers being tops in the Horizon League. Alec Peters, one of the best forwards at the mid-major level, can score both inside and out for a team that led the Horizon in offensive rebounding percentage (36.6%) in league games.

And if they lose?: Green Bay

Like Valparaiso, Brian Wardle’s team gets a bye to the semifinals. Seniors Keifer Sykes and Greg Mays lead the way for the Phoenix, who lead the Horizon in field goal percentage (46.6%) and also have the league’s lowest turnover rate. Green Bay has also been solid defensively, but if there’s a concern it’s what could happen if an opponent forces them to resort to three-point shots (they’re shooting a league-worst 30.2% from three). Green Bay also received some good fortune in the seeding, as a Cleveland State team that swept the season series between the two is on the other side of the bracket.

Sykes is averaging a league-best 18.5 points per game, shooting 46 percent from the field while also accounting for 4.5 rebounds and 4.2 assists per game. The senior point guard is ranked in the top five in the Horizon League in points, assists (4th) and steals (3rd).