The 37th edition of the Atlantic Sun Conference Tournament will look a little different. Defending tournament champion Mercer has moved on to the Southern Conference and regular-season champion North Florida hasn’t had any sort of recent success. Of course, Florida Gulf Coast remains in the picture and the conference’s campus sites tournament makes for an intriguing element as well. 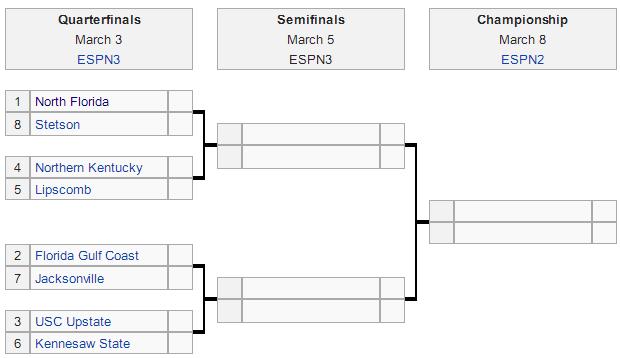 The Ospreys only lost to USC Upstate in Atlantic Sun play this season and swept No. 2 seed Florida Gulf Coast with double-digit wins in both games. The conference’s most uptempo team, North Florida is riding a five-game winning streak entering the A-Sun Tournament and has homecourt advantage in every game thanks to the league’s campus sites tournament policy for top seeds.

And if they lose?: Florida Gulf Coast

Dunk City won’t play the same uptempo style that they used to, but they’re still the No. 2 seed and a talented, experienced team. Brett Comer and Bernard Thompson are seniors who were both on the Sweet 16 team and both will want to return to the NCAA Tournament for one final time.

In his sixth year, Driscoll has a regular season Atlantic Sun champion and the Ospreys will finish above .500 for the first time in his tenure this season.