The Orange had complete control of this game. Villanova never led in regulation. They did trail by 14 in the second half before using an 8-0 run sparked entirely by Darrun Hilliard to kick-start a comeback that culminated in Villanova scoring five points in ten seconds to force overtime.

This is the kind of loss that a rebuilding Syracuse team is going to feel in March. This was their marquee non-conference win slipping through their fingers.

1. No. 24 North Carolina 82, No. 12 Ohio State 74: North Carolina jumped out to a big lead before letting Ohio State back into it late. We had Scott Phillips on site for the game. Here is his story from Chicago.

2. No. 1 Kentucky 83, UCLA 42: Kentucky absolutely embarrassed the Bruins on Saturday afternoon, jumping out to a 24-0 lead and burying UCLA 41-7 at the break. UCLA is a borderline tournament team this season, but they still have some talent on that roster. And that should scare you. Kentucky has now played three games against elite programs on national television, blowing out both Kansas and UCLA and beating Texas by 12. When the Wildcats come to play, who can beat them?

3. SMU 62, Michigan 51: Michigan’s losing streak has been extended for four games, as the Wolverines lost to an SMU team that has been one of the nation’s most disappointing teams this season. Three of those four losses, including Saturday’s, came in Ann Arbor. Given the relative weakness of the Big Ten outside Wisconsin, it’s time to start considering the idea that Michigan is not a tournament team. For SMU, this was an important win, but not as important as the news they got yesterday: Markus Kennedy is now eligible. He finished with five points and three boards off the bench.

1. Terry Rozier, Louisville: Montrezl Harrell got tossed at halftime after this skirmish. He had been all of Louisville’s offense to that point, but Rozier took over in the second half, scoring 26 of his 32 points after halftime.

2. Rayvonte Rice, Illinois: Rice scored 19 points and buried this buzzer-beater to give the Illini a 62-59 win in the Braggin’ Rights game over Missouri.

3. Troy Williams, Indiana: Williams had 22 points, 11 boards, three assists, two steals and two blocks as the Hoosiers knocked off No. 23 Butler, 82-73, at the Crossroads Classic.

4. Kelly Oubre, Kansas: I know that is was against Lafayette, but that doesn’t change the fact that Oubre started and finished with 23 points and 10 boards today.

1. Caris LeVert, Michigan: LeVert was a no-show on Saturday, finishing 1-for-8 from the floor with four points and five turnovers in a loss to SMU at home. He was also torched by Nic Moore, who finished with 17 points. 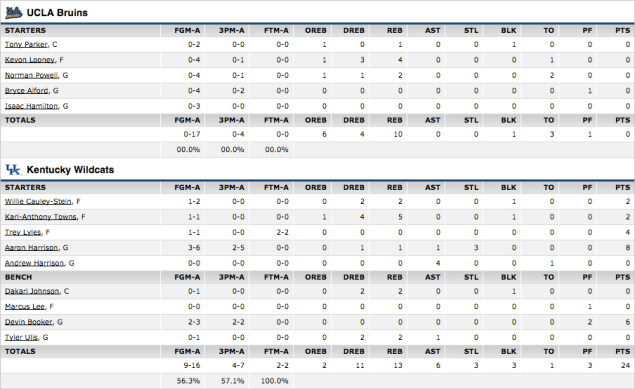 3. Travis Trice and Bryn Forbes, Michigan State: Trice and Forbes combined to score 12 points and shoot 4-for-22 from the floor and 1-for-12 from three as the No. 25 Spartans lost to Texas Southern in overtime in the Breslin Center. That’s a bad, bad loss.