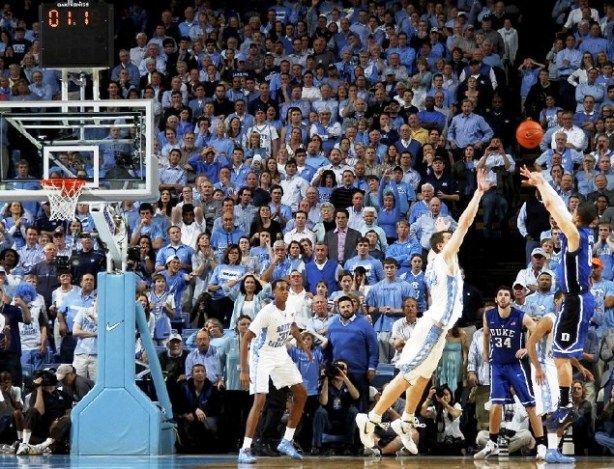 RELATED: Read through all our Throwback Thursdays here

Austin Rivers’ time at Duke was short-lived and, for the most part, unremarkable.

He averaged 15.5 points in his one season, going from a McDonald’s All-American to a lottery pick, but thanks to a foot injury to big man Ryan Kelly, the Blue Devils saw their season come to an end during the NCAA tournament’s opening round. I see you, Lehigh.

But that season did yield one memorable, remarkable shot, as Austin Rivers capped a wild Duke comeback with a three at the buzzer to beat North Carolina:

There are a couple things to love about this video. For one, Dick Vitale’s valiant efforts to loose his mind despite the fact that his voice was shot. But more memorable, at least for me, was seeing the reaction of Doc Rivers to seeing that shot go in.

We’re talking about one of the NBA’s best coaches, a guy that has won an NBA title and led the likes of Chris Paul, Blake Griffin, Kevin Garnett, Ray Allen and Paul Pierce. And after the shot goes in, he absolutely loses his mind. We’re talking about one of basketball’s most influential people, and in this moment, he’s nothing more than a regular dad, unable to control himself in a thrilling moment for his kid.