Delvon Roe was supposed to start along side Draymond Green Tom Izzo this season.

But, as well all found out, Roe’s knees simply wouldn’t cooperate. The hard-working, former five-star recruit simply didn’t want to endure another season of sitting out practices in exchange for ice baths and training room excursions. Can you blame him, especially when you consider his other option involved starring in movies with this chick?

What it did, however, was put the Spartans into a tough situation up front. Tom Izzo’s club was going to be forced to rely upon a pair of talented but unproven big men in junior Derrick Nix and sophomore Adreian Payne.

Nix has been an enigma since he set foot on campus. He’s the kid that shot 27.1% from the foul line as a freshman, that cried during a rally to try to keep Izzo from leaving for the Cleveland Cavaliers, that was suspended in November of last season for personal reasons and called out his upperclassmen teammates during Michigan State’s February struggles. And all of that was on top of the fact that Nix couldn’t get into shape.

The consensus, it seemed, was that Nix needed a wake-up call, that he didn’t have the maturity necessary to compete at this level.

Judging by his appearance at Michigan State’s media day this year, Nix has gotten that wake-up call: 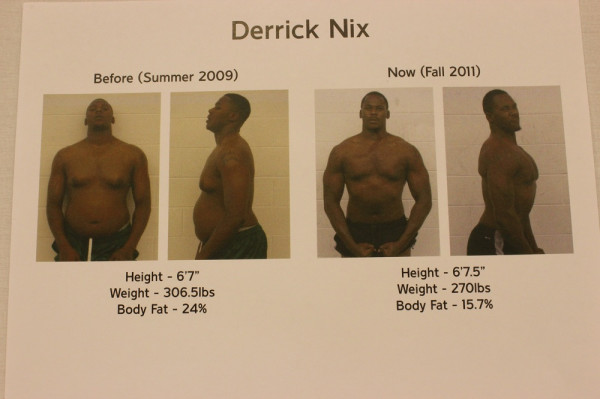 As you can see in the picture at the top of this post, the now-yoked up youngster actually weighed in at media day, checking in at a svelte 267 pounds.

“All I can tell you is where we were last year, we’re miles ahead, and at this time last year, we were in pretty good shape,” Izzo said. “He had some goals we set, and I’ll be honest — I’m going to go out on a limb here — that this kid has matured.”

“I talked to Morris Peterson this weekend and told him to talk to Nix because I see a maturation process of the same magnitude. He has done a pretty good job in the classroom. He’s maintained his weight at a weight we wanted him to be at for just about three-fourths of the summer, and now the first two months of the regular season. I think he’s improved his shooting, he’s improved his free-throw shooting a lot, his ability to get up and down the court has (quadrupled) from what it was.”

Nix is a bruising, 6’8″ post presence. If he’s in good enough shape to play consistent minutes this season, he’ll provide a nice compliment to Payne’s athleticism and Green’s versatility.